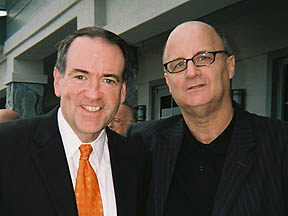 Posted by The Meck

Here's a good article regarding my longtime friend, Mike Huckabee, speaking in Birmingham Al. today.
Gov. Huckabee has no problem giving President Obama credit for his "gutsy" decision to use special forces to find/kill Bin Laden. In the last 2 years, Gov. Huckabee has been critical and very complimentary of President Obama.
He knows you can never be viewed as believable/credible if you aren't at least objective.
-
President Obama will be very difficult to defeat in 2012. Before Bin Laden's death and for sure after. Gov. Huckabee would be the only one [I believe] who would have a legitimate chance to unseat Obama. [He should have been the GOP nominee in 2008].
It is a tough assignment .. to defeat an incumbent President. History confirms that.
-
Is Gov. Huckabee running for President in 2012 ..?
He hasn't decided yet. That's what he's shared with me over the last several months.
Meck
-
excerpt .. Bham News


In another moment that drew applause, Huckabee praised what he called President Barack Obama's "gutsy" decision to go after bin Laden deep inside Pakistan using special forces, instead of the easier decision to launch an air attack.

"I give him (Obama) credit for making some very tough and very good decisions," Huckabee said speaking to a questioner who had just appeared critical of Obama for taking what she called "credit" for killing bin Laden.

"Let's be fair. This is a man who could have just said, 'Let's go drop some bombs on the compound.' He didn't do that," Huckabee said. "Instead, he took the risky decision, a gutsy decision, to send in the (Navy) Seals. It frankly showed in him a level of leadership I had not seen in him the previous two years."
Mike Huckabee Calls President Obama's Decision To Go After Bin Laden "Gutsy" - Bham News
--