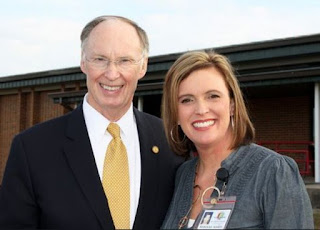 By Donald V. Watkins
©Copyrighted and Published (via Facebook) on September 4, 2015.

By all accounts, Alabama First Lady Dianne Jones Bentley is a first-class woman.  She is widely known for her compassion and respect for all Alabamians.

Mrs. Bentley is a graduate of the University of Alabama with a degree in bacteriology. She met Governor Robert Bentley during his first year of medical school and they married on July 24, 1965.  She loved and supported her husband throughout their marriage. She is a loving mother to her four sons.

As First Lady, Mrs. Bentley has chosen to support foster care and promote awareness for domestic violence prevention and Family Justice Centers.  She is a staunch advocate for healthy marriages and families.

Above all, Mrs. Bentley is a Christian who always strives to remain in God’s will.

On August 26, 2015, this advocate for healthy marriage signed her name to a sworn divorce complaint she would file two days later against her husband of 50 years.  A mere 32 days after the Bentleys’ Golden Anniversary, the First Lady of Alabama swore that her marriage to the Governor was over.

On August 28th, Mrs. Bentley broke with the time-honored tradition where a political wife “suffers in silence” while her husband carries on an extra-marital affair.  Even though the Governor’s infidelity was not yet public and her husband’s mistress had skillfully crafted his public image as a “Christian”, the First Lady took the bold and painful step of filing for a divorce against her husband.  In doing so, she honored herself, her dignity as a woman and loving mother, and her Christian principles.  This was a rare act of courage by the wife of a sitting governor.

The divorce filing caught the Governor by complete surprise. He was stunned, angry, and visibly shaken.

Mrs. Bentley’s divorce action signaled to the world that she would not live a lie.  She was prepared to endure whatever public shame and embarrassment flowed from her divorce filing, suffer any act of retaliation or revenge from the Governor and his henchmen that might result from her public disclosure that their marriage was over, and bear the heavy burden of starting life over again at 72 years old.

Mrs. Bentley’s sons supported their mother’s divorce action.  They had become estranged from their father because of his betrayal of their mother’s trust and love.

Through the divorce filing, a stunned Alabama public learned for the first time that the First Couple had separated in January of 2015. The First Lady had taken up residency in Tuscaloosa while he remained in the Governor’s mansion.

Details of the divorce trickled out at first.  The complaint simply said there was “a conflict of personalities which destroyed the legitimate aims of matrimony” and that “all possibilities of reconciliation are futile”.  It also claimed that the marriage had suffered an “irretrievable breakdown” and that “further attempts at reconciliation are impractical and not in the best interest of the parties”.

The First Lady was right.  Governor Bentley had exited the marriage.  He was in love with another woman.  He was a cheater.

The signs of the Governor’s cheating were subtle at first, but by the 2014, they were in Mrs. Bentley’s face.  She had reached the breaking point by the couple’s 50th wedding anniversary on July 24, 2015.

Which brings us to the crux of the story: What happened and why?

Bentley was elected as Governor in November of 2010 and took office as Alabama’s 53rd governor on January 17, 2011.   Bentley was considered a long-shot for governor and had never enjoyed any high visibility in life, yet this little-known dermatologist and legislator from Tuscaloosa was now the governor of Alabama.

Once Bentley became governor, he changed.  He manifested an oversized ego and an inflated sense of importance.  Bentley became enamored with the trappings of the office – the trooper escorts, use of the state airplane, global travels to exotic ports of call, access to dignitaries and celebrities, life in the Governor’s mansion, and other perks of the office.  Staff members catered to his every whim.  Bentley loved it all.  He had gone from obscurity to rock-star status and simply could not handle it.

After taking office, Bentley brought several people into his inner circle.  One was Wendell Ray Lewis, a black state trooper sergeant from Tuscaloosa who would go on to receive a total of $799.285 in base pay and overtime (from 2010 to 2015), as well as a highly questionable promotion from sergeant to lieutenant over more objectively qualified white troopers, during Bentley’s first term in office.  The Governor also placed Lewis in command of his executive security detail, a position that has been historically held by higher-ranking troopers.  Lewis became a close Bentley confidant whom the Governor rewarded handsomely.

Lewis, who holds strong Christian beliefs, retired from the trooper force a few months ago, in part, because he was powerless to stop Bentley’s marital infidelity.  Because Lewis had developed a strong admiration for the First Lady while serving on the Governor’s security detail, he could no longer function comfortably in the duplicitous environment of deceit and betrayal perpetrated by Bentley on the First Lady.  Lewis’ loyalty to Mrs. Bentley’s principled life as a devout Christian trumped the Governor‘s efforts to curry favor with him.

To his credit, Lewis actually tried to encourage the Governor to stop his illicit love affair.  Bentley would not listen to Lewis, or anyone else.

Another member of the inner circle was Rebekah Caldwell Mason, the young and attractive mother of three children who evolved from a little-known Tuscaloosa public relations consultant in 2010 into the architect of Bentley’s “Christian” public image during his successful re-election campaign in 2014.  Mrs. Mason, who joined the Governor’s staff as his communications director in 2011, is married to Jonathan P. Mason.  Jonathan was a weatherman at WVUA, a small local television station in Tuscaloosa.  This was a low-paying job.  Bentley created Serve Alabama in 2011, which is the state agency for the Governor’s faith-based programs and services, and made Jonathan its director.

Bentley also brought in David Byrne, a Montgomery attorney, to serve as his legal advisor.  Byrne’s wife, Alice Ann Byrne, was already on the state’s payroll as the general counsel of the State Personnel Department, a position she had held since August 2000.  This powerful husband-wife duo made all things happen for Bentley when it came to the assignment, promotion, and compensation of state employees like Wendell Ray Lewis, Jonathan Mason, and Rebekah Mason.  No one in the Personnel Department questioned this duo’s legal advice or power, nor did anyone question directives David Byrne issued on behalf of the Governor.

Rebekah Mason’s work placed her in constant contact with the Governor.  Over time, the two developed a deeply personal relationship.  Along with the personal relationship came lucrative financial payments for Rebekah and her husband Jonathan.  As communications director and owner of RCM Communications, Inc., Rebekah Mason has received a total of $161,570 in state pay (from 2011 to June 2013) and contracts to RCM from Bentley’s campaign committee totaling $426,978 (from July 2013 to November 2014) because she enjoyed a special personal relationship with Bentley.  Her compensation since November of 2014 will be discussed in a later story.

Jonathan Mason has received a total of $393,538 in state pay (from 2011 to date) and has dominion and control over a staff of thirteen employees because of his wife’s special relationship with Bentley.

By July 2013, Rebekah Mason had moved out of the governor’s office to serve as the communications director for Bentley’s re-election campaign.  After the election, she became Bentley’s “Senior Political Advisor”.  The two became inseparable.  Bentley fell in love with Rebekah Mason.  She became his paramour.  After achieving paramour status, Mason had unfettered access to state trooper transportation, the state aircraft, the Governor’s mansion, and a host of other state resources and privileges typically reserved for the First Lady.

There were two big problems with Bentley’s obvious affection for Rebekah Mason.  First, Rebekah was married to Jonathan, a member of Bentley’s staff.  Second, Bentley was married to the First Lady.

As time passed, Mrs. Bentley picked up on the affection and body language between the Governor and Rebekah Mason.  She confronted Bentley about the relationship, and though the Governor admitted his affection for Rebekah, he claimed it was platonic. The First Lady later discovered for herself that the relation was much more than a platonic one.


Confronted with the devastating reality that Robert Bentley was a cheater, Mrs. Bentley started distancing herself from the Governor.  Staffers had to beg the First Lady to attend events during and after the re-election season.  She reluctantly agreed at the last minute to appear at Bentley’s January inauguration while she mulled her options.  After consulting with her sons, Mrs. Bentley opted to file for a divorce.